Hard geography lovers, here’s an amazing chance to feel the real map of the African continent. All the details are available for you. From Morocco to Madagascar through the Hottentot Water to Cape Agulhas, take our Countries of Africa map quiz game and discover even what you haven’t learned at school.

Do you know all the countries of Africa by heart?

Do you know exactly where any African country is located on the African Continent?  This is a quiz game that will help you train your knowledge on Africa. You can also use it as a study tool to help you learn about the locations of the countries in Africa. Countries of Africa map quiz is an educational game where you have to guess the african countries on a 3D map. The main goal of the game is to guess the countries by tapping on them. Use your memory , focus your attention to improve your vocabulary . 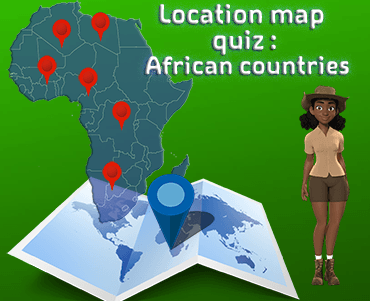 50 Quizzes Map of Africa Countries : guess the country by its shape

This game has 50 timed quizzes. You have to recognize the country that appears in the 3D image to get 5 points. To consider yourself an expert, you must score at least 190/250. Come and prove that you are the biggest fan of Africa! You will also find this game useful if you want to study geography or review it as an exam is coming up. Africa is one of the most diverse continents on Earth, it’s considered as the cradle of humanity. Africa is home to many different cultures, languages, religions, and ethnic groups. It’s also home to some of the world’s most beautiful landscapes. This quiz is an educational game with the aim of strengthening the knowledge of children, students, parents and teachers on mastering the shapes of the countries in which they live or would like to go there. Can you guess an African country by its shape? Can you take up the challenge? Do you know African countries? Test your knowledge and learn their names in a fun way. This game is amazing because you will be able to know all the African countries, share it with your friends and even describe more than 15 different shapes of each country.

A game to learn by heart the shapes of Africa countries, with the goal of strengthening young brains and make geography a fun task. For children and adults, students and teachers.

Africa is one of the most unique continents on earth and it’s home to some of the world’s greatest natural wonders. But knowing a country just by seeing their outline can be difficult. Now, let’s see if you have what it takes to master this map game. Map Quizzes of  African countries : 30 questions is a free online game that lets you test your knowledge of Africa countries. This game gives you an opportunity to learn and get acquainted with the African world. Africa is one of the most diverse continents on Earth, it’s considered as the cradle of humanity. Africa is home to many different cultures, languages, religions, and ethnic groups. It‘s also home to some of the world‘s most beautiful landscapes.

You have to open your mind, remove all prejudices…Sometimes the most abstract shapes, when seen differently, can reveal their real shape. Can you guess the country to 5 points? 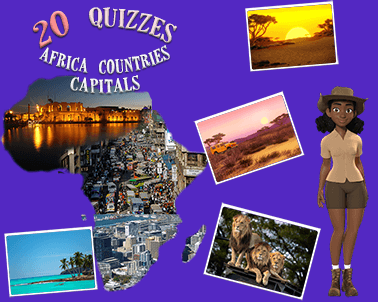 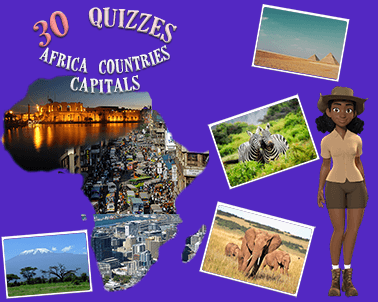 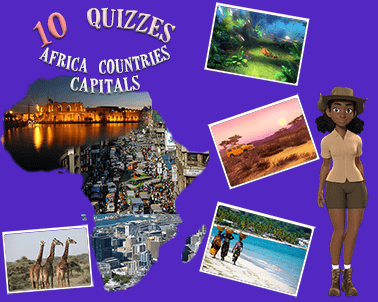 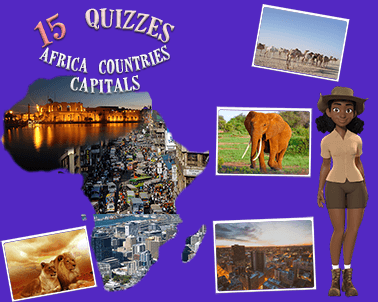 The countries of Africa – an interactive quiz

You think you know Africa pretty well? Test your knowledge in this map quiz with Africa map. Around 40 countries are covered. With special background music to let you relax while studying, this interactive quiz game will allow you to challenge your online friends or random players. You can also share your results on Facebook!

Get to know better the African countries with this quiz game. If you are an African travel enthusiast, an armchair traveler, you will enjoy discovering Africa on your smartphone. Use your skills on this interactive quiz game oriented entirely on images of African countries to train your three-dimensional vision. Easy to use interface, pleasant background music … Test your knowledge in this geography quiz game for smartphones!

Similar games are also available on I like2learn.

Africa is a continent of about 30,221,532 Km2. This is divided into two categories: sub-Saharan Africa and North Africa. In this quiz, you are going to be provided with a map of sub-Saharan Africa while the names of its countries are given. You will have to locate those countries on the map in order to test your geographical knowledge. On the right side of the page, you will find a small map that shows which country is being asked for at every question – this will help you identify each location before picking it correctly on the larger map. Learn the locations of the countries in Africa through these helpful maps and games. In this module there are three types of quizzes you can use to test your knowledge of the African countries. Fill in the blank map of Africa. Play same game here in Apkpure.

This is a fun and educational game where you have to guess the African countries on a 3D map. The main goal of the game is to guess the countries by tapping on them. The only thing you need to play this game is your memory, focus and attention. The educational game Africa Map Quiz is an original educational tool that offers kids and children a new way of learning geography. The main goal of the game is to learn the cities and countries of Africa. How to play? You should correctly identify African countries on the 3D map in the shortest time possible. Have you already got acquainted with African countries on a map? Register for free and get your country’s highest rating. Do you like this game? Share it with your friends!

Africa is the second-largest and second-most populous continent in the world. At about 30.3 million km2 including adjacent islands, it covers 6% of Earth‘s total surface area and 20% of its land area. With 1.2 billion people as of 2016, it accounts for about 15% of the world population.

Countries in Africa Map – Find out where each country in Africa is located and what its name means.

This game will allow you to identify African countries by learning their names and locating them on the map. It will give you an additional 100 points each time you correctly guess a country. The most important goal of the game is to help you remember all the African countries. Learn and test your knowledge about Africa countries in an African Countries Map Quiz app. Improve your memory and vocabulary by challenging the game different levels. Use it as a tool while you are learning the geography of Africa continent.  This quiz game is an educational game that helps you improve your vocabulary about Africa. You will be able to identify Africa countries by tapping on them. You can repeat the game again and again to improve your vocabulary about the land, people, culture and nature.

Guess the African countries by tapping on them. Use your memory, focus your attention to improve your vocabulary. Africa is the world’s second-largest and second-most populous continent. The game contains 25 countries quizzes of Africa